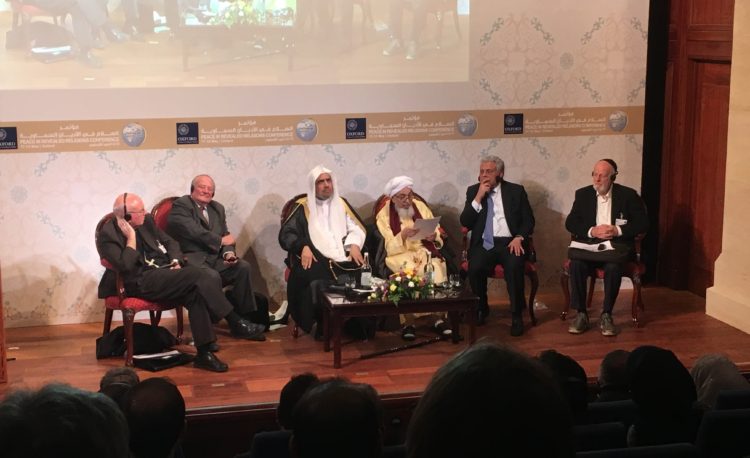 By invitation of H.E. Sheikh Dr Mohammed bin Abdul Karim Al-Issa, Secretary General of the Muslim World League in Makkah, the Islamic Reporting Initiative was invited to participate in the 2-day conference on ‘Peace in the Revealed Religions’ held jointly by the Muslim World League and the Oxford Centre for Islamic Studies. The peacebuilding forum took place on 11 and 12 May at the Oxford Centre for Islamic Studies, University of Oxford.

The objective of the forum was ‘to bring together academics, theologians, and faith leaders from Abrahamic faith traditions to jointly explore the themes of peace, tolerance, and a good society’.

In his opening speech, Sheikh Al-Issa laid out a number of programs and initiatives aimed at strengthening society by consolidating the concept of national unity. He also called for the formation of centres and councils with the objective of facilitating dialogue between communities across all sectors.

His speech was followed by other keynote speeches from H.E. Sheikh Abdallah Bin Bayyah, President of the Forum for Promoting Peace in Muslim Societies; The Most Reverend Archbishop Kevin McDonald, Emeritus Archbishop of Southwark & Chair of the Bishops’ Conference Committee for Other Faiths; Rabbi Dr Norman Solomon, Senior Associate of the Oxford Centre for Hebrew and Jewish Studies; Sir Alan Munro KCMG, Former HM Ambassador to the Kingdom of Saudi Arabia & Honorary Vice-President of the Saudi-British Society; and Dr Farhan Nizami CBE, Director of the Oxford Centre for Islamic Studies.

“I strongly support the objectives of the Islamic Reporting Initiative in that it intends to bring clarity and transparency into business practice.

This will not only enable business owners and executives to better manage their operations in line with Islamic teachings, but also help demonstrate to others the true essence and identity of Islam, and its benefits to society and the environment.

Indeed, in this way the Islamic Reporting Initiative has real potential to create an important platform for dialogue between cultures, through the shared notion of sustainability.”

Founded in 1962, the Muslim World League is a pan-Islamic non-profit organisation based in Makkah, Saudi Arabia that propagates Islamic teachings. It works towards ‘serving the community and initiating constructive dialogue with various faith groups focusing on points of agreement. It respects other faiths and social groups by building bridges of understanding’.