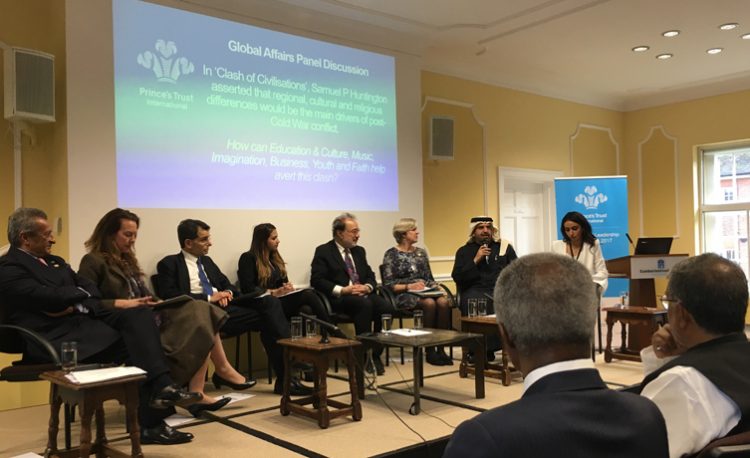 On addressing global challenges together, Imam Ibrahim Mogra pointed to the power of diversity as a tool for unification: “To be a good Muslim, one first has to be a good human being. God has enabled human beings to stand up and protect others, and to stand up for the rights of the oppressed. In doing so, we need to celebrate our cultural differences and focus on our many shared values.”

To underscore this message of common humanity, the Imam quoted verse 49:13 of the Qur’an: “O mankind, indeed We have created you from a male and female and made you peoples and tribes that you may know one another. Indeed, the most noble of you in the sight of Allah is the most righteous of you. Indeed, Allah is Knowing and Acquainted.”

Imam Ali Abbas Razawi was asked to comment on the recent call of Shaykh Abdallah Bin Bayyah for an ‘alliance of virtues’ to enable different faiths to work more closely together in putting forward the message of peace.

Imam Razawi: “All of humanity, in all its multiplicity, is united by virtues – reflections of God which are found in everyone – such as love, compassion, and a sense of righteousness. Conceptualised by Aristotle as ‘virtue ethics’, these are values which are indeed shared irrespective of one’s faith, social, or cultural background.

Today we find ourselves at the cusp of history, confronted with social, political and environmental challenges on a scale we’ve never seen before. The need for dialogue and cooperation has therefore seldom been more urgent. To achieve effective progress, I fully support the notion that dialogue should take place on the basis of common virtues. I am inspired by the countless examples in history where multiple cultures have coexisted in peace and harmony, and where societies have thrived as a result. While the form of dialogue may need adaptation, the essence of virtue is timeless.”

The second panel, on world affairs, was influenced by the book Clash of Civilisations by Samuel P Huntington. The panel presented alternative views to the book’s premise that regional, cultural and religious identities will be the main source of conflict in the post-Cold War world. Panelists shared their thoughts and opinions from perspectives of education and culture, music, imagination, youth, business, and faith:

Last but not least, the audience was further inspired by speeches from Nobel laureates Kailash Satyarthi and Kofi Annan, who shared their views on leadership, with a particular focus on the role and potential of young people.