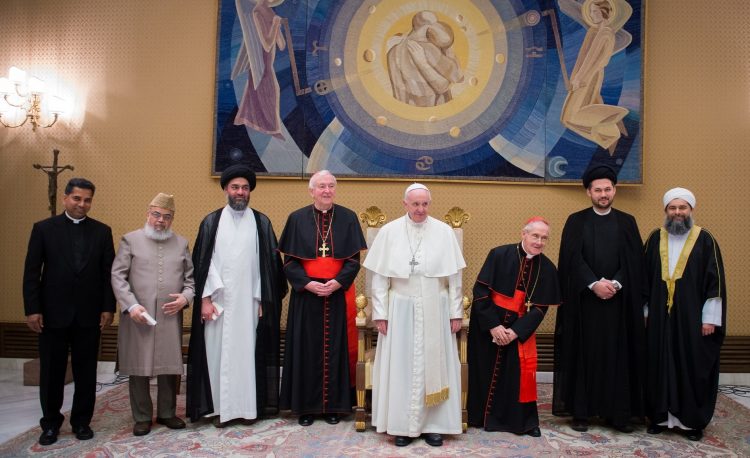 On 5th April His Holiness Pope Francis welcomed a delegation of UK Muslim leaders to the Vatican to discuss collaboration and faith in relation to social action in the United Kingdom.

The meeting was described by the BBC as the most historic meeting between Christianity and Islam in the modern history of Europe. Moulan Sayed Ali Abbas Razawi, who is a member of the IRI Standards Commission, said, ‘I was deeply moved by the audience with Pope Francis. I could see the sincerity and love in his eyes as he offered words of encouragement to all of us as we came together in unity. This is an important meeting offering hope for everyone, regardless of religion. There is a common humanity to all of us. Some seek to divide people, religions, and east and west, but there is no east or west; there is just our common humanity as we seek a peaceful future for all based on justice and compassion.’

These words were echoed by Cardinal Nichols, who  spoke of ‘profound spiritual dialogue’ and expressed his wish for  ‘the voice of authentic Islam to be heard clearly.’ He also spoke of the ‘continuing promotion of collaboration at a local level at the service of all in society.’ The cardinal explained that Pope Francis is committed to engagement with other faiths, and that his willingness to welcome British imams was a further demonstration of the desire for continued positive interfaith dialogue.

The dialogue between these Abrahamic faith leaders sends the clear message to communities in which they serve that faith must continue to live and that dialogue must always triumph over conflict. Pope Francis voiced his belief that listening to one another was essential to the common future of humanity in shared lives, where everyone can be united in mercy and peace.

It has been announced that that Pope Francis will shortly be travelling to Egypt, accepting an invitation from President Abdel Fattah al-Sisi, Roman Catholic bishops, the leader of the Coptic Orthodox Church of Alexandria and the grand Imam of the Al-Al-Azhar mosque in Cairo. These meetings respect the profound theological differences that exist between faiths, but also value the need for great religions to unite in solidarity for peace. Other plans for the Pope include a visit to Bangladesh where he will continue his dialogue with the Muslim community.