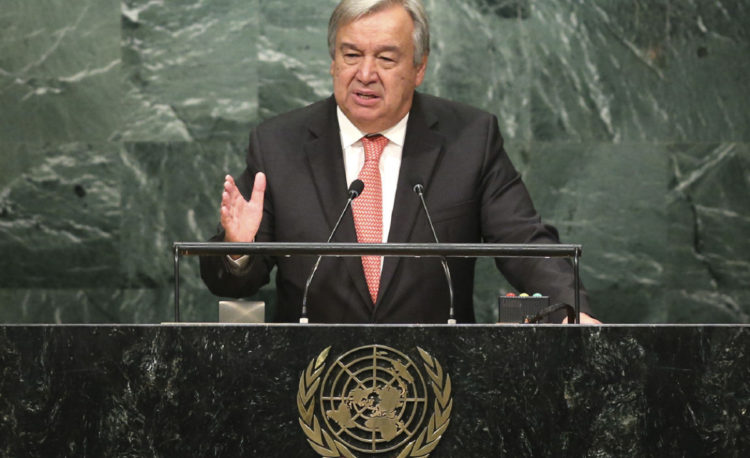 On 27 and 28 September, the Islamic Reporting Initiative (IRI) will participate in the United Nations General Assembly High-level Meeting on the Global Plan of Action to Combat Trafficking in Persons, taking place at the United Nations headquarters in New York.

The IRI’s participation is kindly made possible by the Amersi Foundation and MIT Global.

The General Assembly is one of the six main organs of the United Nations, the only one in which all Member States have equal representation: one nation, one vote. All 193 Member States of the United Nations are represented in this unique forum to discuss and work together on a wide array of international issues covered by the UN Charter, such as development, peace and security, international law, etc.. In September, all the Members meet in the General Assembly Hall in New York for the annual General Assembly session.

The opening plenary meeting on 27 September 2017 will feature statements by the President of the 72nd session of the General Assembly, the Secretary-General, the Executive Director of the United Nations Office on Drugs and Crime and the Special Rapporteur of the Human Rights Council on trafficking in persons, especially women and children, as well as an eminent person actively engaged in the fight against trafficking in persons and a representative of civil society.

Furthermore, the IRI has been invited to participate in two interactive panel discussions focused on the Global Plan of Action, creating effective partnerships, the review of achievements, gaps and challenges – and considering the implementation of the Sustainable Development Goals.

Currently, issues such as trafficking in persons have little to no reporting practice or standards. One of IRI goals is to develop new guidance on such complex issue and close this specific gap in supply chain-related reporting. IRI welcomes organizations interested in this specific aspect to contact us.

Mohamed Amersi, Founder and Chairman of the Amersi Foundation, and Chairman of the IRI Board of Trustees, said: “The promotion of inclusive and sustainable economic growth, employment and decent work for all (SDG 8) is a core focus area of the Amersi Foundation, whereby action against human trafficking, and indeed modern-day slavery, are essential priorities. I am delighted to enable the IRI’s participation at this high-level meeting of the UNGA, as to support further momentum and collaboration for this critical cause.”

Earlier this year, the Amersi Foundation kindly facilitated the IRI’s participation in a number of events related to the implementation of SDG 8, for example the interfaith dialogues at the Vatican and Lambeth Palace, high-profile events organized in cooperation with the President of Malta, and also the Nobel Peace Prize Laureate Kailash Satyarthi, and conferences held at Wilton Park, Windsor, the Royal Society of Arts, and the University of Oxford – to name but a few.

Muhammed Ikram Thowfeek, Founder and Managing Director of MIT Global, said: “Both MIT Global and the IRI share the goal of promoting ethical business activities which are based on trust, transparency and respect – while advancing the sustainable, socio-economic growth and development of the Muslim world. It gives us great pleasure to together support further traction for this cause at the highest international level. This marks yet another fantastic milestone in the IRI’s rapid development.”

About MIT Global:
MIT Global is a UAE-based Islamic finance consultancy and advisory firm that brings in specialist experience and exposure gained over more than three decades, whilst being practically involved in setting up Islamic banks and financial institutions in the Middle East from scratch.